Thank you for stopping by The Golden Pen Review, a blog dedicated to promoting authors, giving marketing tips, and publishing insight. 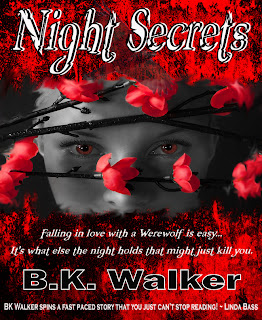 Vampire twins - one wants to love you, the other wants your blood. A Werewolf - vows to protect you. Magic - stirs within you.

That's Night Secrets, a suspenseful paranormal romance written by B.K. Walker, author of Dares And Dreams and Death Upon Me.

After Keira Crosby spends months mourning her parents' death, Jared, her best friend, is determined to get her out and moving on with her life. Night Secrets, a new club in town, has a grand opening bringing with it dark secrets of the night and magic within Keira she never knew she had.

For Corbin, Keira ignites his passion. For Dante', she ignites his thirst. It's up to Channing and his pack to keep her alive from the supernatural beings he hates most...Vampires. As the secrets of the night and Keira's heritage unfolds, her world is turned inside out. Who will be the last one standing?

Night Secrets is a fast-paced, page turning paranormal romance with the perfect supernatural mix that you can't stop reading and will leave you aching for more.

Keara Crosby has everything a girl in high school could want: living in luxury, a jeep, and even a butler. The one thing missing is her parents who were killed in a tragic accident.

When Keara comes out of the haze of her parent’s death she finds her world changing. She meets a new love, Channing, and finds herself in the world of werewolves, vampires, and herself a shape shifter. Battle lines are drawn when a jealous twin, Dante, assumes she’s the love of his brother, Corbin’s, life and Keara is caught in the middle.

Night Secrets is a great read. I found myself unable to put it down until I was finished. Once finished I was still left with a lot of unanswered questions which I know/hope will be answered in the next installment. I also enjoyed how the book gave me a different perspective on Morgana who is said to be King Author’s half-sister. I’ve always looked at her in a negative light but this book, though fictional, has opened my eyes to another view of her.

If not for the feeling of needing more at the end I would give 5 golden stars but it still sits at a 4.5. Great job BK Walker.


This book was provided for reviewing purposes.
Posted by Me at 5:00 AM

How to get featured

If you are an author, reader, or a publishing insider and would like to be featured please feel free to contact me via email, thegoldenpenreview@yahoo.com.